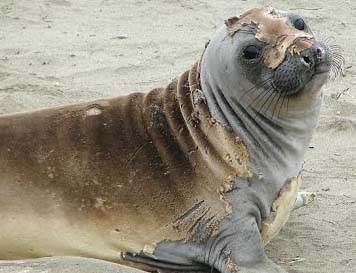 The little seal didn’t look good.  The first time I passed it on the beach, I didn’t even see it because it resembled one of the many rocks that had eroded from the cliffside during the winter storms. I went back to look more closely because of a sign, warning that the seal was being monitored and it was a federal crime to disturb it.

The seal was very still. It’s skin seemed loose and patchy. If it hadn’t been for that sign, I probably would have called an animal rescue agency. The sign, however, explained in some detail that the shaggy little seal was an Elephant Seal Pup, undergoing a “catastrophic molt.”

Female elephant seals have one pup in late December. Each mom nurses her baby for four to six weeks with milk so rich the pup grows from about 75 pounds at birth to 250-350 pounds in less than a month. The mother doesn’t eat while she’s nursing, so at the end of the month, she escorts the pup to a beach and leaves it while she goes out to sea to feed.

For the next 25-28 days, the pup sheds the layer of epidermis attached to its dark baby fur and grows the sleek silver coat of an adult. During the process, the young seal loses half its body weight and looks pretty awful. People who find the seals often assume they are dying which is what I would have done except for the sign.

Catastrophic molting! It’s such a dramatic phrase, and it got me thinking about situations in which we are forced to shed cherished ideas about what works in our lives. Supportive environments may erode. Unexpected harms may be revealed. Anticipated benefits may fail to materialize. Regardless of the reason, some form of cooperation that seemed to be producing mutual benefits isn’t working anymore. In order to get to new forms of cooperation, we have to go through the difficult process of shedding a failed hypothesis.

In my own life, I went through this experience when we learned our infant daughter was deaf. My husband and I had to let go of our fantasies about the kind of life a hearing child would have. It felt like a catastrophic molt, but we emerged with a sleeker, tougher hypothesis that allowed us to cooperate in building a good life for the child we actually had. Because every child is a unique individual, I think most parents go through something similar, letting go of an idealized hypothesis about who a child will be so they can love the specific child standing in front of them.

Of course, this kind of catastrophic molt isn’t confined to parenthood. During the past twenty years, one industry after another has been disrupted by more efficient technologies and new productive partnerships. As a result, workers who were very proficient with a certain set of skills find themselves as irrelevant as blacksmiths after the invention of the automobile. They made perfectly reasonable assumptions about the kinds of capabilities that would make them employable, but the environment changed in ways that undercut those assumptions. The only way to thrive going forward is to shed the original hypothesis and regrow a new set of assumptions and skills.

For many citizens, the most recent election has also triggered the equivalent of a catastrophic molt. Suddenly, structures, policies and procedures which produced cooperative benefits in the past were called into question. Many people found themselves reluctant to shed assumptions, even when it was clear that they were no longer producing mutual benefits. When people put faith and effort into particular cooperative ventures, this kind of recalibration can certainly feel catastrophic.

Perhaps that’s why the predicament of the baby elephant seal interested me. I went home and read more about this remarkable mammal with the improbable proboscis. As it turns out, catastrophic molting is an annual event for elephant seals. Unlike other mammals that shed and regrow hair year round, elephant seals live in waters so cold that blood doesn’t circulate next to the skin. Once a year, they haul themselves out of the sea and grow an entirely new layer of epidermis and fur.  The seals are vulnerable when they molt, so they pack tightly together. They may look tattered and tired, but they cooperate to minimize their vulnerability while developing the sleek new skins that allow them to spend another year at sea, diving to depths that would destroy other mammals. (For more information about elephant seals, including a live cam, visit Friends of the Elephant Seal.)

Something similar is possible for people who find that a hypothesis about cooperation has failed. We may need to haul ourselves out of the waters where we’ve been swimming. We may need to sit quietly in the company of others who are having the same experience. But we need to use that time to rethink our assumptions and generate new hypotheses about how cooperation might produce benefits that are genuinely mutual.

The next time I went to the beach, the seal and the sign were gone. But the idea of catastrophic molting has stayed with me. Shedding old ideas about how things should be may feel catastrophic, but it also creates opportunities for Intentional Imagination.  How can we expand our cooperative vision to include those we may have overlooked, correct unintended harms and create ways for people to thrive in a changed environment?  Cooperative Wisdom depends upon recognizing and letting go of our hypotheses when they are failing us so that, like the Elephant Seal, we can grow something that will serve us better.