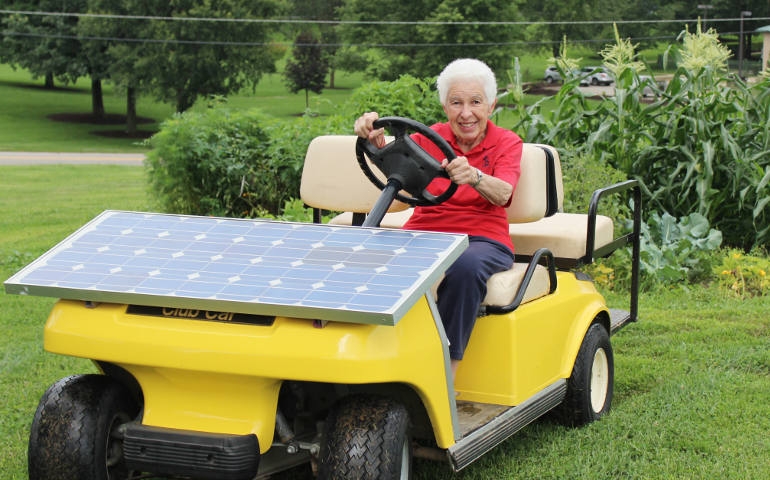 Editor’s Note: There will be a short tribute to Sister Gonzalez before the 4:30 panel discussion led by Dr. Scherer at the Building Big Solar Conference to be held on August 25 in Bowling Green Ohio

They called her the Solar Nun. Among other things, Sister Paula Gonzalez was famous for driving a little yellow golf cart, powered by a solar panel. When she died, earlier this year at the age of 83, testimonials poured in and people called her a “prophet” and a “horizon buster.”

From our point of view, Sister Gonzalez was an exemplar of Cooperative Wisdom, and it is instructive to think about what she was able to accomplish by practicing the social virtues. Born in 1932, Sister Gonzalez grew up in Albuquerque, NM, where, as a child, she helped her father raise vegetables. As she told the Catholic Reporter, he  taught her that the earth was sacred, a lesson that was at the heart of her “eco-spirituality.”

After earning her college degree, she became a Sister of Charity in 1954.  She earned a PHD in cellular physiology and taught biology until 1980.  Her true calling became apparent in 1969 when, as she put it, the famous photo of Earth from outer space “completely changed” her life.  “The Apollo picture just grabbed me by the hair of my head,” she said years later, “and I became a global citizen on the spot!”

Throughout her life, Sister Paula regularly practiced the five social virtues. She exercised Proactive Compassion by recognizing the risks created by unsustainable practices involving energy and other resources.  In the early 80’s, she began encouraging people to “live lightly” and led by example. Between 1982 and 1986, she mobilized a group of volunteers who converted an old chicken barn into a passive solar home which she called La Casa del Sol—the House of the Sun.

Practicing what we call Intentional Imagination, she designed and constructed the building using materials other people regarded as waste.  When supplies had to be purchased, her team raised the funds through garage sales, another form of recycling. In the end, she told Mother Earth News she spent $10 per square foot to build a cozy, super-insulated home, heated entirely by solar power. During the winter of 1985, when temperatures plummeted, the temperatures in the house never dipped below 50 degrees. Just as important, La Casa del Sol helped coalesce a community committed to sustainability.

Throughout her long career, Sister Paula was also skilled at Inclusive Integrity, building cooperative partnerships that were more durable because they embodied multiple values. In the early 90’s, she founded EarthConnection, an environmental learning center. Once again, she rescued an unused building, converting a four car garage into the headquarters for the organization.

Completed in 1995, the center continues to showcase energy-saving technology and creative use of recycled materials. The building itself features a super-insulated building envelope, double-paned insulated windows, floor tile made of waste glass, a wall made of aluminum cans, and carpeting made of recycled two-liter pop bottles. One system of particular interest combines solar and geo-thermal energy: summer heat is transferred from solar thermal collectors to an insulated bed of earth around the building where it is stored for use during the winter. Today, EarthConnection offer tours, internships and educational programs for those with an interest in sustainable agriculture, alternative energies and eco justice.

In 2007, at an age when most people would retire, Sister Gonzalez attended a conference sponsored by Green Energy Ohio, an organization which promotes development of renewable energies. Disturbed by what she heard about climate change, she collaborated with Keith Mills to found the Ohio Chapter of Interfaith Power and Light, a national project which has programs in 40 states involving over 1800 congregations.

These highlights represent only a few of Sister Gonzalez’s accomplishments: She also supported the work of the Alternate Energy Association of Southwestern Ohio and served on the board for Green Energy Ohio. She developed audiotape courses in Earth-healing and wrote articles on ecospirituality, renewable energy and conservation.  She gave over 1800 presentations to conferences and organizations around the world, encouraging people to live more simply.  As a volunteer for the Cincinnati Catholic Climate Change Task Force, she helped implement $1.4 million in energy-efficient projects in Cincinnati parishes and Catholic schools.

In short, she worked tirelessly to create social systems that would be more sustainable because they respected the needs of multiple partners and the earth itself. Sister Gonzalez once told The Cincinnati Enquirer that “most of the so-called environmental questions are not principally scientific questions. They are principally moral questions.”  We couldn’t agree more. Sister Gonzalez inspires us because she understood that goodness consists of cooperating to create benefits that are genuinely mutual. She devoted her entire life to thinking, working and persuading others to find more sustainable ways to live together, and we honor her for her Cooperative Wisdom.