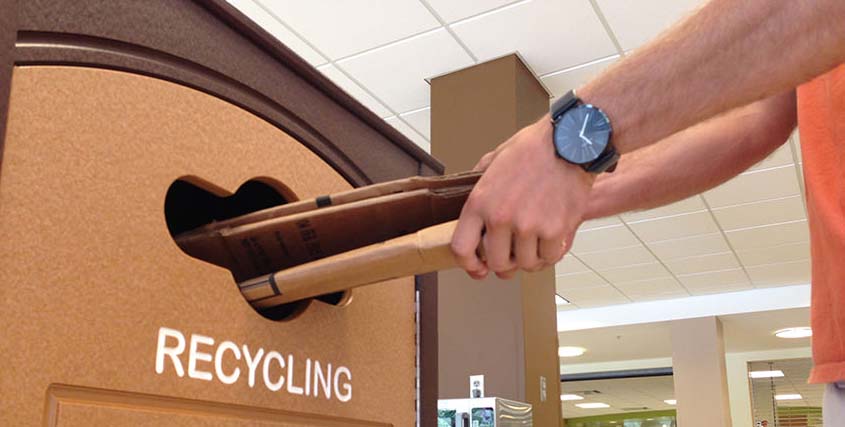 Every fall thousands of students migrate from home to campus, leaving in their wake millions of boxes and packing containers.  This year, at Bowling Green State University, residents of one campus learning community introduced newcomers to Recycling 101 when they volunteered to assist with Move In Day.  In addition to hauling boxes out of vans and into dorm rooms, they also saw to it that those boxes—and other items—were recycled.   With help from the Sustainability Center, the service project was a major success, collecting 25 tons of recyclables including 15 tons of cardboard and 10 tons of bottles and cans.

This project epitomizes the good that can come from an integrated effort built on intentional imagination.  The University saved the cost of hauling and landfilling 25 tons of trash; the Sustainability Center earned income from the recyclables.  The student volunteers had the satisfaction of doing something to make their campus more sustainable, and thousands of incoming students were introduced to the idea that recycling was a way of life in their new environment.

Campus recycling projects are springing up at colleges and universities all over the country.  Many educational institutions are pursuing Zero Waste as a goal, and students and staff have come up with creative ideas about how to make that happen.

Campus recycling projects like these encourage young people to develop habits that will serve them well throughout their lives.  Many conflicts arise because resources seem scarce.  If it seems that there isn’t enough to go around, people will defend what they have.

Cooperative Wisdom encourages us to explore other alternatives.   We can provide more of what’s needed if we think about resources differently.   What can be conserved?  What can be reused or recycled?  When students expand their capacity for intentional imagination and become collectors of recyclables, they begin to value themselves as contributors to sustainable communities.