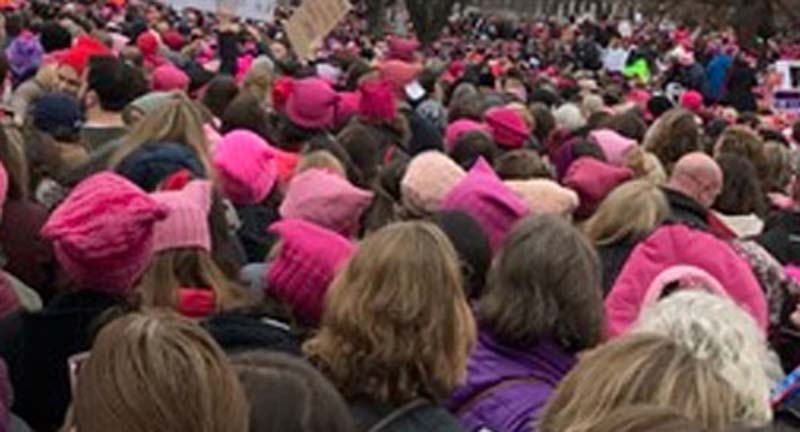 From time to time, we ask permission to share essays by people whose experience gives them unique insight into Cooperative Wisdom. This essay by Cynthia Zanti Jabs seems especially appropriate for February, a month when many of us think about opening our hearts – to romantic love, to good health and to the possibilities that exist only when we come together.  Cynthia has studied Asian healing arts for many years and practices accupuncture at the Ruscombe Mansion in Baltimore, Maryland.  More of her essays appear on their website.

Along with millions of other women, I participated in the Women’s March in Washington after the inauguration.  The moment that sticks with me came before the march began when the crowd was still coalescing.

People were pouring out of subways stations and side streets. Mostly women, some men. Gray hair and babes in arms. Wheel chairs and skateboards. Every ethnic group. And every color in clothing and posters, although pink did predominate. It was a fast paced crowd but not like rush hour commuters. Easy conversations with total strangers all along the way. Some started with posters and slogans. So much art!

As people converged from all directions, things slowed down. The density of the crowd increased. A few people climbed trees, streetlights and the walls of the nearby museum. People gradually filled whatever openings they could find.

We had no idea how far the crowds extended. Technical communications broke down as cell networks overloaded and loudspeakers couldn’t carry sound from the podium even though it was only a block away. We just stood, shoulder to shoulder, hip to hip. Sometimes I’d lean against someone next to me and they’d lean back.

Then we heard a siren. Word rippled thru the crowd: An ambulance needed to get thru! My first thought: That’ll never happen. There was confusion and a scary sense of urgency. We didn’t know where the ambulance was or where it was trying to go. Word of mouth messages passed one to one. People tried to respond but there was no where to go. There was a collective up take of breath and I think we all got a little taller. Still no room for a vehicle.

Then, I don’t know how, the crowd managed to part just enough for the ambulance to ease thru. What I remember is that my feet were not quite on the ground when it  passed. I was lifted up as the multi-headed creature we’d become shape shifted to make space where there was none.

My thought in that moment: It’s not just that we are stronger together. We are ONLY strong together.  As I caught my breath, I was flooded with gratitude for the safety and protection that came from being in such close connection.  We were ALL incredibly vulnerable in that moment. And, miraculously perhaps, we stayed upright and supported each other – literally!

Once the ambulance got through, we settled out into more independent personal spaces. But eye contact showed up differently. Brief. A little sheepish. Wide eyed. Startled. Awkward laughter.  Knowing sparks that come only with intimacy.  Without words, we acknowledged that what had happened was unexpected and a little frightening. And coming thru it together was deeply different from experiencing it alone.

As Americans, we rarely find ourselves in such an eye-to-eye, hip-to-hip dance of being vulnerable together. We’re such a big country. So much space between so many of us. We can easily find ourselves isolated from each other, unaware of the experiences that reveal vulnerability. And when forget that we are ALL vulnerable, we miss opportunities for mutual support in our ungrounded and out-of-control moments.

It is tempting to wish vulnerability were not part of life. We wish we could avoid the fright, insecurity and pain that come with it. But, like it or not, vulnerability is built into our design, and unless we acknowledge its universality, we’ll stay lost to ourselves and each other.  I don’t think we can cross our divides until we get that vulnerability is universal.

They say you can judge a society by how it treats its most vulnerable. That’s because recognizing and dealing with vulnerability in others is how we learn to deal with our own vulnerability. We can’t mature, as individuals or as a society, without an awareness that some things are within our control and some are not.  The categories aren’t fixed. What wasn’t possible yesterday might be possible tomorrow–and vice versa. Still, there are always limits to our understanding and to our ability to protect ourselves. Just as there is, in the end, a limit to life itself.

The ever-changing balance between what we control and what we don’t is the diciest one we humans have to manage. In Asian healing arts, we say finding this balance is the role of the Heart. Like a supreme emperor, the Heart keeps peace n the kingdom by “accepting our divine mandate” in other words, taking charge of what we can control for ourselves, and surrendering what is beyond our control to the power of something greater than ourselves.

The idea of Divine connection is a key concept in holistic approaches to healing and it shows up in pretty much every spiritual tradition.  It’s encapsulated in the Serenity Prayer that often plays a part in recovery from addiction: “God grant me the serenity to accept the things I cannot change; courage to change the things I can; and wisdom to know the difference.”  The prayer implies partnership. Without it, we won’t know when to accept what we can’t control and when to control what we can’t accept. With partnership, we can relax into the rhythm of filling and emptying, filling and emptying–the most basic rhythm of our life for as long as we live.

What I experienced in the crowd at the Women’s March has stayed with me. I would describe my heart as very full in that moment. Only for a moment, of course, because the beat goes on. Still, when I feel more vulnerable than I can manage, I remember coming together in that crowd and being lifted up together to respond to vulnerability in a way that none of us could do on our own.