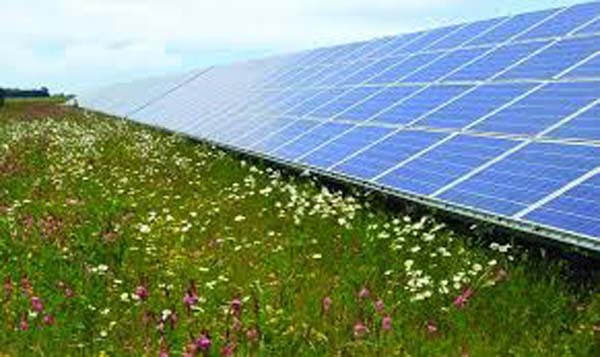 What makes a community project sustainable? I spent my career in philosophy trying to distill the principles that allowed people to cooperate in ways that persist over time. Those principles, including Intentional Imagination, are described at length in my book, Cooperative Wisdom. We finished the book one year ago. Today, social environments, especially in the US, have evolved significantly. Yet the principles we outlined continue to have value, and people who practice them continue to create benefits that are definite and durable.

My co-author and I regularly come encounter communities in which people are creating diverse benefits by practicing Cooperative Wisdom. They don’t always call it that, but we can see it for what it is. Recently, I’ve witnessed the blossoming of community solar in my own hometown of Bowling Green, Ohio. In particular, the community is benefiting from the practice of Intentional Imagination. Here’s the story:

As many people know, solar energy is the most abundant energy resource on earth – 173,000 terawatts reach the Earth continuously.  That’s more than 10,000 times the world’s total energy use. Not surprisingly, many communities would like to tap into an energy source that is clean, renewable and local energy source.

Bowling Green, Ohio, is one of those communities. In January, 2017, the town began to enjoy the benefits of a solar array that had been installed on 190 acres outside of town. The project which includes over 85,000 solar panels will provide 4% of the electricity consumed by all industrial, commercial and residential customers in the community including Bowling State University. (A helpful explanation of how solar panels work is available in this video TED lesson by Richard Komp.)

The project makes use of one-axis solar panels 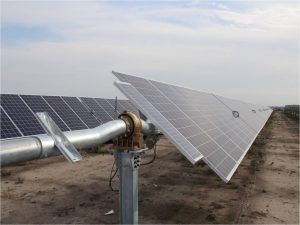 which follow the sun from east to west each day.  The panels resemble teeter totters that start with one end at the ground. As the sun moves across the sky, the teeter totter slowly tilts until the other end is at the ground.  This technology reduces costs because each panel can collect more solar energy than a stationary unit.

Solar arrays of this kind have become more practical because of improvements in battery technology. In the past, once a unit of electricity was created, it traveled through wires until it was consumed. This created inefficiencies both because energy was lost during transport and because demand was uneven. Utilities had to design their systems to meet peak demand, so energy was often wasted during times when demand was less. Better batteries make energy available when demand peaks.   As a result, the entire system becomes more efficient because utilities don’t have to build excess capacity simply to meet times of high demand.

The initial Bowling Green Project has a life expectancy of 30 years. After that time, the equipment can be disassembled and the site can be restored to its natural state at a minimal, pre-paid cost. In the meantime, the solar array produces the energy used by approximately 3100 averages homes in a year. Just as important, it avoids approximately 22,725 metric tons of CO2 that would have been produced annually if the electricity had been generated using fossil fuels. That’s the equivalent of taking 4785 cars off the road every year.

All of this is good stuff, and it stimulated Intentional Imagination on the part of Municipal Utility employees who started asking the What if questions that are the hallmark of Intentional Imagination.  For example, the existing project was developed by an out-of-state energy services that used solar panels from China, and the structure of its financing precluded local investment.  What if the community could develop another project with an in-state developer who used solar panels manufactured in the United States? Might an in-state developer bring along more in-state labor?  What about seeking local parties to capitalize the development and buy the electricity generated by the project? Does the state government offer opportunities for inexpensive financing for renewable energy?  How might regional banks get behind such development?

As so often happens, one set of what-if questions stimulated others: The parallel lines of panels are 15 feet apart. What if the land between the lines of panels and the setbacks around the entire field could be planted in wildflowers.  The US Fish and Wildlife Service has provided seeds for native wildflowers because wildflowers provide habitat for bees which are threatened in many communities. What if the bees could be managed by beekeepers who could harvest and sell their honey?

And, what if the solar array became an educational resource for local schools?  In New York, Wisconsin and Minnesota, teachers have created and used lesson plans to fit K-1 lessons about renewable energy into the science curriculum. Large energy companies have taken an interested in funding such educational initiatives. If there were an educational pavilion at the solar array, perhaps Science Center exhibits could give students and the general public a better understanding of how solar energy works.

The answers to all of these questions are still emerging. Still, the practice of Intentional Imagination is drawing new partners into the process—farmers, educators, engineers, solar manufacturers, beekeepers, bankers, investors and local and regional government agencies as well as the local residents and business that consume energy.  Having input from all of these sources can seem a little chaotic at times, but it creates a stronger foundation for the teamwork and trust that will be needed for a sustainable project.  By soliciting ideas from many sources and practicing Intentional Imagination now,  local leaders are more likely to avoid unintended harms and create an installation which will bring benefits to the community for years to come.

This essay is adapted from a PowerPoint Presentation given to the Bowling Green State University Retirees Association.